Google vs Microsoft Bing: Check Out a Detailed Comparison of both Search Engines

With the growing popularity of online first approach, we now have a new topic added to the list of never-ending debates and that’s Bing Vs Google. While many would be on Google’s side as it dominates the industry in every aspect today, it would be wrong to assume that other search engines are not in the race.

If you have been thinking that there’s no comparison between Bing and Google, you are wrong. Keep reading to know how Bing & Google are different in their ways. But even before, let’s see why exactly we need to know about the difference between the two. 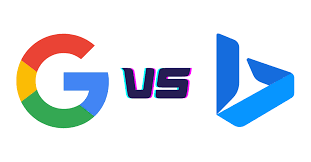 Why Google Vs Microsoft Bing?

The reason behind checking out this Google Vs Microsoft Bing comparison is their market shares. By looking at Bing’s and Google’s market shares over the years, you will understand how Bing has been growing.

At present, Google owns 83.84% of the shares in the global market whereas Bing owns only 8.88%. However, Google previously owned almost 90% and Bing had only around 4% in its ownership.

The Difference that matters

When talking about Bing Vs Google, many believe that they work pretty much the same way. However, on diving deeper into the comparison, some big differences can be found-

On the other hand, Google is more focused on the interpretation of language rather than keyword stuffing. When comparing both, it becomes difficult to optimize a website for Google, and is quite easy for Bing. If your website needs to be optimized for both, it’s important to have the perfect balance of keywords in every area of analysis along with good content.

Google, on the other side, gives you hyperlocal results when you ask for anything local. Google offers ‘Google Books’ & ‘Flights & Finance’- something that Bing lacks to offer.

Since 3 VPAs out of the 4 most used run upon Bing’s results, it can be said that Bing is a strong competition for Google in the sector of voice search.

Bing Vs Google in Paid Advertising

The most important difference between Bing and Google comes to the limelight when paid advertising is considered. Google, undoubtedly dominates this industry- given its wide audience. But Bing has not entered the market unprepared.

Microsoft Bing has been running major strategies to increase its prominence in the paid search industry. At present, Microsoft Advertising is the only advertising source across Yahoo and AOL. Moreover, Bing focuses on visually appealing ads. The engine keeps these ads exclusive, meaning that only one ad is shown on a SERP.

Google ads don’t offer exclusive positions and are also a little more expensive than Bing. But when it comes to audience coverage, Google surely performs better because it dominates almost 84% of the consumer base.

Hence, if you are confused about the best search engine for your website, you should probably try a combination of both Bing & Google for paid advertising.

When it comes to advertising for your website or business, it is a good time now to give Bing a shot. Bing’s and Google’s market shares as well as consumer base show that even though Bing has less audience, it still owns a very specific consumer base. So, if your business wants to target Bing’s audience, then using it could be a sure shot.

Depending on the type of website and what you have to offer, you could get drastically different results from both search engines. And, to know these differences precisely, you would have to try them both. After all, both these search engines offer their own unique features and thus, this ‘Bing Vs Google’ debate could really go on for a while.

We DO Not Accept PayPal as a Payment mode for payments related to SEO & PPC Services.